Linda, the author of Are We There Yet? and a fellow Nutmegger, tagged me Sunday for this, The Fifth Sentence Book Meme. I got around to doing it today and it was fun!
Here are the Rules:

And my offering is: 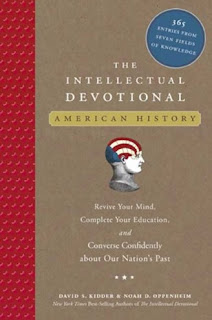 I picked up "The Intellectual Devotional American History" which has been sitting on the coffee table since I gave it to Ralph for Christmas.
In an incredible coincidence when I opened to the specified page it was about the "one and only" Phineas Taylor Barnum.
He is of course quite a character, and someone about whom I blogged in August, after we visited The Barnum Museum in Bridgeport.
Coincidentally at the time Linda left me a response that she'd like to visit the museum someday.
I recommend it. As for this book, I admit I haven't read it yet.

Here are the three sentences:

Exhibiting her throughout the Northeast, Barnum made a huge profit off gullible audiences who paid to gawk at the woman Barnum claimed had been "George Washington's nurse." He soon hired his most famous midget, the twenty-five-inch tall Charles Sherwood Stratton (1838-1883), who went by the stage name General Tom Thumb and became so famous he was summoned to meet Great Britain's Queen Victoria in 1844.
Barnum, who later in life established his first traveling circus, P.T. Barnum's Grand Traveling Museum, Menagerie, Caravan and Circus, was the first to admit most of his shows were pure "humbug."
And now I tag:
Lynn
Odat
Michele
Sari
The Curmudgeon

Excellent job, Patti! I liked this one very much and it really was kind of fun, wasn't it?!?

Still need to get to that museum!

Yikes...Can I cheat and pick an intelligent book instead of the trashy one that I am reading?

Hehe this is a cool meme, I might have to follow up with it, too. Though my books are out of reach at the moment as I'm typing this in bed and do not yet have a night stand.

Meme accomplished! Well done! Im not very good at doing them. But this one looks like fun!

Linda: Thanks and it was fun! Come on down to Bridgeport!!

Odat: Glad you're gonna play along..

Christy: Please do play along. Oh you laptop folks - I'm so old-fashioned.

Casdok: Give it a whirl!

I just did this one... but I'm on a different book already so maybe I'll give it a whirl.

Ok, I picked TWO books trying to do this and neither one of the worked!

One was The Book Thief, and it is a title page to a chapter on page 123. The other was The Invention of Hugo Cabret (Nine is reading it) and page 123 is an illustration!

So, the books are telling me it's not my time. But thanks for picking me anyway! :-)

Egads... I searched everywhere in my house for a book and I haven't any except magazines and cookbooks and a phonebook... seriously!! I can't do this one... LOL!! I just don't read. I draw, paint, internet, fish, walk, crossword puzzlers but I don't read but I don't even own a bookcase...
Yeh, I'm pretty sad.... hehe.