I had lunch yesterday at a new restaurant with daughter Allegra and a friend.

When we were paying at the counter our friend pointed out this shadow..he knows Ralph and I are into shadow shots!

Change of pace: Going out for the evening 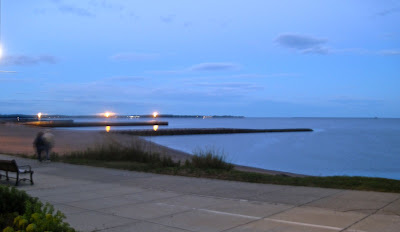 This was the view when we left last night's annual dinner meeting of the Center for Disability Rights in West Haven, Ct. It was lovely out, no heat or humidity.
The lights are from New Haven Harbor. I think it looks rather romantic.

There are always lots of folks walking on this paved pathway along the beach.
It's a popular destination for exercise and relaxation. 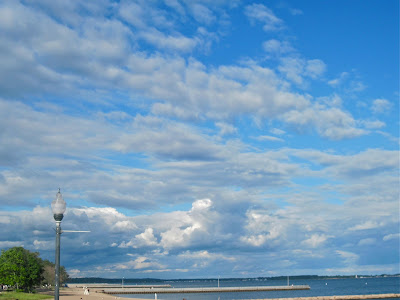 I love the dramatic clouds! 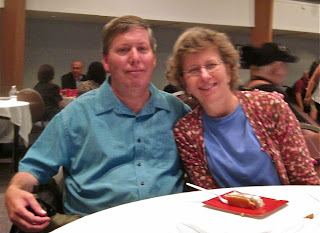 * Bonus photo: Blurry, yes, but I think we look pretty happy together. We are happy, aren't we Ralph?

I'd be even happier with a new camera.

I thank the woman at our table who offered to snap a photo of us. I wouldn't have thought to ask her.

This story has a happy ending

Well I guess it's about time I posted something on my personal blog..been busy trying to keep two other blogs current!

This afternoon I wrote a story about a couple in the next town who won a $25,000 makeover from the Desperate Landscapes show on the  Do-It-Yourself Network for their front yard and house, situated on a quiet, dead-end street.

I'm acquainted with the wife, so I felt a real attachment to the story. She grew up with my neighbor and they have been best friends since childhood.

She also shares my first name, which is always fun. ;-)

Please give the story a look ~ it's a heartwarming one.

The couple has two children: a teen-aged son, and an eight-year old daughter with special needs.

They had more than their share of problems with a contractor several years ago. He left their front yard in a state of disrepair, they said.
Their property was a mess and they couldn't afford to fix it. 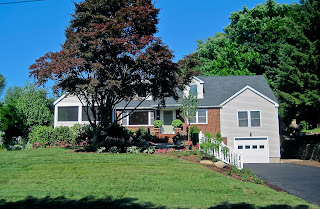 Now thanks to winning a contest for having the ugliest yard in New England their home and the yard look absolutely beautiful.

I'm happy for them! They deserve this good fortune.
Posted by Patti at 7:46:00 PM 4 comments

Happy Father's Day to my hubby

... or as our children call him, Daddums. 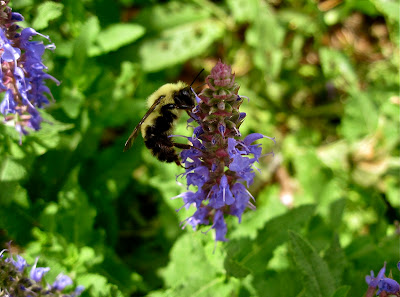 I was lucky to capture this bumble bee making his rounds the other day on one of the perennials ~ purple spikes I think they're called.

Most of the shots were blurry. But this one works.

I need/want a new camera, and I think I'm going to get one! Even though I really can't afford it.

Looking at ads for Nikon point-and-shoots. Soon I shall get one. I feel a shopping trip coming on. ;-)

Last weekend I wasn't organized enough to post any shadow shots. But I doth return.

On Saturday we attended a survivors' reception (lunch) at the American Cancer Society's Relay for Life in Shelton, Ct. , and on Sunday we attended a birthday celebration (lunch) for cancer survivors at Griffin Hospital in Derby, Ct. (Lots o' lunches!) And sadly, lots of families affected by cancer.

On Sunday morning before the birthday lunch we went to our small city's second annual Pierre Lallement Festival of Bikes.
And we went back to the street festival after lunch. So I didn't get around to posting for my own blog, just for the newspaper's blog and later in the week for a new blog featuring our local arts council, Brush Strokes. 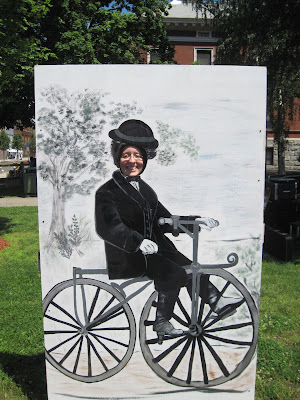 One of the Main Street shop owners painted this board ~ I thought she did a great job! 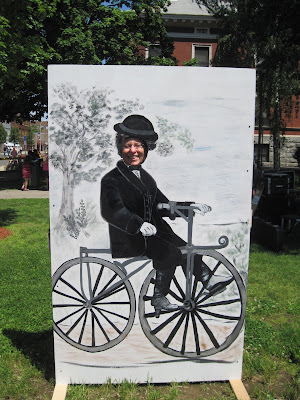 Join in the fun and see lots more shadowy photos from around the world at Shadow Shot Sunday.

Where would we be without art?

I apparently can't keep up with posting on my blog so what did I do this week?

I launched a new one!

But it's for a good cause: bringing art to the masses, as we like to say.

It's for the Valley Arts Council, a group to which Ralph and I belong.


It's all about non-fancy art created by un-stuffy artists!

And poetry readings at the Gallery@37 in Derby, Ct.

And displaying said art in the gallery.

Please give it a look-see..leave a comment and I'll love you forever.
Posted by Patti at 8:02:00 PM 0 comments

Thoughts on Relay for Life

Hard to believe I haven't posted here in a week. I've been blogging though, keeping View from the Valley full of good stuff on the New Haven Register's site.

On Saturday Ralph and I went to a wonderful lunch catered by Outback Steakhouse for cancer survivors. It was held before the American Cancer Society's Relay for Life in Shelton, Ct. I wrote about our perspective on the relay here. 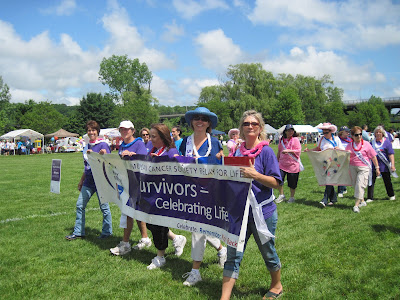 Here is the survivor's lap at the opening ceremony. I don't know any of these ladies, but just behind them are members of "Circle of Friends," the support group to which I belong. I tried to get a photo of them as they passed by but it was blurry. They were way too fast for me.

We were surprised to hear my my name read from the list of survivors at the opening ceremony. I signed in at the lunch and that was the list they used.

I wasn't on a team, we just went to have a good time. I give those who stay there for 18 hours or more a lot of credit! I don't have that kind of energy. 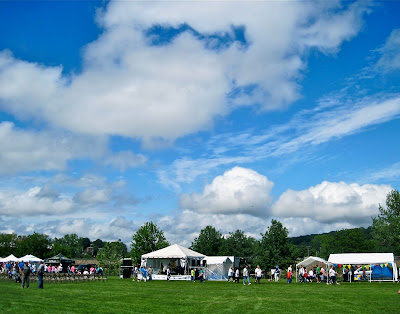 It was pouring rain when we got there but it cleared up after lunch in time for the opening ceremony. Look at these beautiful clouds!

I thought there was a good turnout of relay teams and tents filled with people selling food and crafts and games of chance to benefit the American Cancer Society.
It's overwhelming to think of the numbers of people whose lives have been affected by cancer just in our little part of Connecticut.

I hope the event was a success and a lot of money was raised toward the goal of kicking cancer to the curb.

This is another in an occasional series about my journey with breast cancer.
Posted by Patti at 7:01:00 AM 2 comments