I seem to be busy with work and life in general and my blog has been ignored.
That doesn't make me feel good. But I have returned.

What does make me feel good is I'm blogging away as part of my job.

Yesterday I wrote a story for the newspaper about Saturday's second annual Women's Day of Health at Griffin Hospital (in Derby, Ct.) and also wrote a blog post about it. I even mentioned my own breast cancer surgery. I'm not one to reveal too much about myself, but it was in me to write.

I knew quite a few of the ladies there, and enjoyed chatting with them. There were slightly more than 100 registered.
Darling daughter, one of the youngest participants by far, accompanied me and we had a great time, as we did last year. And we ate! Yogurt and fruit for breakfast and a delicious chicken wrap, apple, and goodies (cookies and pretzels - Ralph got the pretzels) for lunch were included.
All in all a wonderful event. We're looking forward to next year.

Please click on the link above and tell me what you think.

~ And so my breast cancer journey journal continues...thanks for reading.

Today I wrote a blog post for the newspaper about a wonderful Girl Scout troop in our city. I hope it adequately demonstrates my gratitude.


The girls have been working on a special project all year, and clearly have learned about the importance of caring for others and giving of themselves.


They recently showered me and other members of our "Circle of Friends" breast cancer support group with goodies and  handmade items. Their thoughtfulness impressed me and my friends in the group.

And so my cancer journey journal doth continue.

Last Saturday Ralph and I went to an Easter egg hunt to support the group organizing it. We were totally turned off by some of the parents there, teaching their children to cheat.

On Tuesday I wrote this blog post about it for the newspaper:

My husband and I attended an Easter egg hunt Saturday on the Derby Green.
We were there to support several friends who are members of the Derby Cultural Commission, sponsor of the annual event.

It was a sunny afternoon and lots of children and their parents and grandparents were on hand for some old-fashioned fun.
The Easter Bunny even made an appearance.

Local magician Bryan Lizotte mesmerized the crowd of young and old with plenty of magic tricks before the egg hunt was scheduled to begin.
On Monday I posted this photo of the event.
The problem was when some of the parents and children started to inch away from the audience and inch toward the upper part of the Green where the candy had been placed for the hunt.
These parents really started to anger us as we were chatting with Cultural Commission members attempting to stand guard over the sweet treats.
Simply put, these folks were cheating and teaching their young children to cheat, by grabbing candy while most of the other children were still enjoying the magician's performance.

There was no excuse for that behavior. One of the teen-aged volunteers spreading the candy was actually threatened when he told a parent the hunt hadn't yet started.

Next year will be different, commission members said afterward. The area where the candy is placed will be cordoned off, to nip potential cheating in the bud.

It's a shame when the actions of an uneducated few can ruin an otherwise fun, family-oriented event. 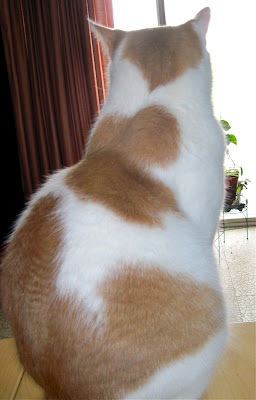 Does this fur make me look fat?