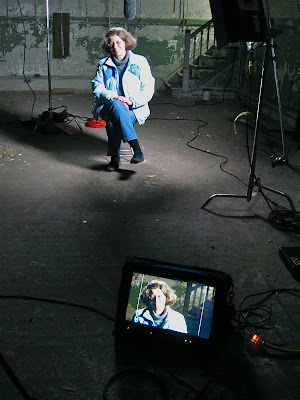 Yup, that's me. On TV!
Well, actually being taped for an upcoming "Ghost Hunters" program on the SyFy Channel. I may be on TV. I don't normally blow my own horn, but this was kinda out of the ordinary.
The co-stars (lead investigators) of "Ghost Hunters" are Jason Hawes and Grant Wilson, two guys from Rhode Island who founded TAPS, The Atlantic Paranormal Society, several years ago.
I was one of five people interviewed on camera last week about what kinds of paranormal activity I'd witnessed inside the historic (and dusty) Sterling Opera House in Derby. Ct.
I hope my "15 minutes of fame" don't end up on the cutting room floor.
The show is supposed to air in May.
I can't tell you what I saw on two separate visits to the 19th century structure. You'll just have to watch the show! When I find out the air date I will post it.
It was fun to see how the cast and crew work to produce an hourlong episode. Everyone was friendly, and the cast took the time to chat and pose for photos. They caused quite a stir!
Here are links to two stories I wrote on the TV show's visit: First story, and second one.
It was a fun week, that's for sure.
My daughter Allegra took my photo at the taping. Since it is filled with shadows I thought I would post it.
Boo!

Visit our awesome Aussie friend Tracy at Hey Harriet, who hosts this meme each week, and join in the shadowy fun.
* Bonus photo for TAPS fans! This is Grant Wilson posing in front of the Sterling Opera House minutes after he arrived in Derby, Ct. on Feb. 28. He is quite a friendly fellow. It was great to meet him. 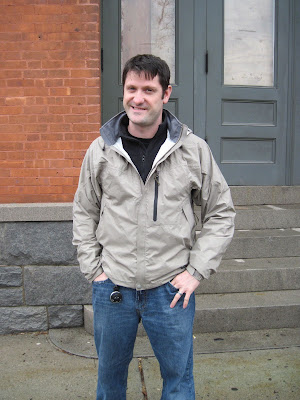 You have absolutely NO idea how jealous I am that you got to meet Jason and Grant and be on the show!

I certainly hope that your 15 minutes of fame don't end up on the cutting room floor as I am totally excited to watch the show and jump and down and say "I know her! I know her!" I can't wait, seriously!

How cool is that! I don't watch much TV, but if it airs, let me know!

What a fun post for the day and I do hope you don't end up on the cutting room floor, but it looks like you had so much fun! I love it! Thanks for sharing the fame!!! Enjoy your weekend!

Great shot! This was a fun post for me to read due to the fact that my husband is a Key Grip in the film business. Sometimes he gets a wee bit jaded and bored with what he sees, I'll have to show him your post. I hope you get tons of air time!

How EXCITING, Patti! Yes, please post the time and date. What a fun experience.

Oh wow! What exciting news! Congrats Patti! I'd love to see the show when you're on but it's not likley it airs over here. Perhaps somebody could upload the segment to youtube for all of your international friends to watch! :)

Too cool!!! But so darned ironic too in a way...my dear man and I were just now wondering why they changed it from SciFi to SyFy and here you are, sitting pretty on TV no less.

My Shadow Shot Link BOARDWALK along the wildlife refuge

you look fantastic!! like a real time celebrity journalist
now don't go getting all kooky and celeb like on us ;)
this is so exciting !!

How fun! I look forward to watching this episode.

How fun!!! The subtle shadows from your photo session just suit the mood, too.

can i have your autograph patti so i have it when you become famous? this is awesome...please do post the air date.

oh my goodness...how fun is that Patti? We sure hope that you end up on the tele!
We've been strolling through, and reading about your diagnosis. Know that we will be keeping you in our prayers!